Day 253 - The Quantum Moment Before the Death of a Chicken 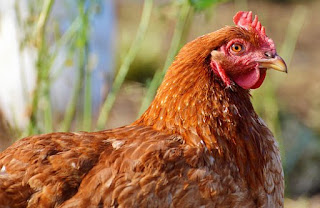 I have already written this article, but the first question that came up is: why it is important? So I asked myself and answered: It is important because our daily moments make us who we are, and in each moment, we get to decide who that is. It has become a cliché that one must be the change they want to see, but that cliché is true, and we can literally only develop ourselves one moment at a time. Each moment is crucial towards our self-development, even if it's a seemingly mundane, daily moment. And so, in this article I share one such moment as an example of how it is possible for each one of us to learn and change who we are at our core through moment-to-moment application.

Here is my article, I hope you enjoy it!

The Quantum Moment Before the Death of a Chicken

Is it possible to decide who you are in a split-second moment – to look at all the factors that need to be considered, your sound, your intention, your starting point, the events at play, the potential play-outs, your character and where you are at in your process, the character of others involved, and so much more?

I had an experience yesterday where this was in fact the case. I opened the door and Ghost, the husky with a propensity to hunt, sprung out of the gate with an intensified vigour that immediately caught my attention. He bolted across the lawn in what appeared to me, without my glasses, to be a white blur, towards another white blur by the bushes at the other end of the yard.

At first, I thought it was Boeboe, the Maltese-poodle mix, but when I saw wings flapping I knew it was an escaped chicken. I saw Fidelis there, already taking action, I saw Boomie, a herding dog, right there in the mix as if appearing out of nowhere. I thought right away that two charging dogs and a cornered chicken was too much for one person to direct, so I took off running across the lawn to help.

In this split-second moment, I thought about Ghost and his history with hunting and going into a possession when he chases his prey. I saw his body language and his movement and knew that he was going in for the kill. I thought of my own process with developing my authority within myself and with the animals here at the farm, and how I had learned to direct them over time. In that moment, and with all the information and my observations, I made two decisions – one in awareness, and one was a conscious conclusion.

For context, the difference between deciding within and as awareness, versus acting from within and as consciousness, is the following: in awareness, I decide in the present moment, based on the present reality, and that decision in my case is based on a set of principles of doing what is best for all involved. Deciding within and as consciousness is where you act from a pre-programmed starting point, meaning habitual patterns and behaviours, beliefs, self-judgements, self-beliefs, past memories, future fears etc… all play a more significant role and are mostly based in the past and perceived future than here in the present moment. Consciousness decisions usually come up seemingly automatically (because there is no awareness of the timeline in the moment), as if they are already here and decided, and usually have a footing in emotional or feeling energy, as well as and not mutually exclusively, a foot in self-interest. Whereas decisions made in awareness involve assessment of present reality factors, with no emotions or feelings influencing one to sway from their principles as they direct the situation towards an outcome to the best of their abilities.

The conscious conclusion came first and thus impacted the other decision I made. The conscious conclusion was that there was nothing I could do to stop Ghost because he was already in motion, and I already believed that anything I tried would be unsuccessful. This is based on previous inexperience with animals, as well as memories of animals not listening to me and me feeling like I have no control over them.

Immediately afterwards, within the realization that I would not get there in time, I knew I could only use my voice, my sound. This is where my second decision came in, where I made a decision in awareness. The sound I chose was sharp and with no emotion, as I was attempting to cut through the possession Ghost was in towards the chicken, to ‘snap him out of it’ in a way. This choice was made in awareness as I assessed the situation and spoke with intention instead of that out-of-control emotional screaming that can occur in these life-or-death situations.

What disempowered me in that moment though, and I could not hear it, but rather ‘feel’ it in my voice as a ‘knowing’, was that I had already made the decision that I would not be effective due to the conscious conclusion I had come to based on past memories. In my voice was a twinge of desperation that was not audible, but was present in ‘who I was’ in my speaking (or in this case yelling). I could feel the disempowerment and desperation in my body, even though I could hear my sound as loud, unemotional, sharp and confident. And so what message was coming through to Ghost, besides me yelling at him to stop, was me being disempowered and unable to do anything to stop him.

It was over in a few seconds, but my internal process took place in the first fraction of the first second that I became aware of what was going on  - illustrating that quantum moment we all have before we take any action or speak any words. This quantum moment is invaluable as it is a moment we can give to ourselves to decide in awareness who we are, what our principles are and what outcome we will contribute towards in any given situation.

In order to be able to use this moment effectively, we have to be clear within ourselves, walking a process to clear out the ‘consciousness’ we have programmed ourselves as over a lifetime of memories, thoughts, beliefs and experiences, as well as the fears, doubts and self-judgments we carry around, along with so much more, in order to instead make clear and concise reality-based decisions.

Personally, I have used the Desteni ‘I’ Process to work through my conscious pre-programming, and continue to do so as I live day-by-day, making these mistakes and learning form them, clearing myself out bit by bit as I re-program myself to someone I want to be, someone I can trust, someone that makes split-second decisions for example, that are best for all involved.

And so I was tested today, as it happened again, where Ghost made a mad dash for the chickens in the coop. This time there was no hesitation, I had learned from last time, and I immediately took the stance that I would not accept or allow this, and I that I would be able to break through to Ghost.

Now, the fact that I made this decision within myself does not mean reality will abide – we can never predict the outcome of a situation or the effect we will have on people or animals outside ourselves. However, when it happened again, this time I was prepared due to the process of introspection I had walked the first time around.

Ghost took off, and I quickly took my stance, chose my sound and brought it through. Low and behold, when I spoke, Ghost reared back as if being pulled by reigns, he snapped out of his possession and abruptly turned and circled back around towards me.

I realize it was a different situation, and that there could be other factors at play here, but the fact remains that I am practicing, and the more I am able to get through to him, the more likely I will be able to prevent future mishaps. Not only that, but the fact also remains that I am in a learning process, and developing the ability to take a stand in moments, and truly be the authority within myself, and so  my reality. 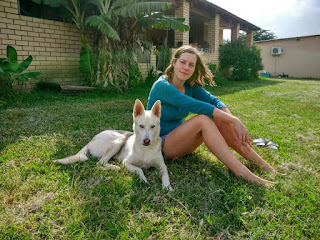