Birthing Ideas from A Starting Point of Energy 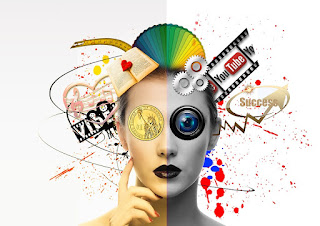 I sometimes have moments in my life where I am flooded with new ideas, what seem to be very good ideas, and when I play them out in my mind I can see so much potential. In my fantasies and imagination, I can even play out best-case scenario successes and I end up getting quite excited about it, especially if the first idea I put into action turns out well.

What I find is that in this excitement energy, I just want to fully indulge myself in creating the ideas and ‘getting them out there’, which all seems fine and good, so what is the problem? The problem is that anything that is created from a starting point of energy, rather than a grounded, clear and practical approach, is bound to be met with unforeseen and unnecessary consequences in the process along the way, in the final result, in how the time and effort required to realize the idea fits in to the rest of my life, or how the idea plays out over time in the long-term.

For me, my idea was making a certain style of video that would effectively market a product, as well as get a message out into the public realm in a way that is interesting and engaging. The first video I made went well and almost ‘fell into place’ easily, it was a lot of work, but things seemed to work out smoothly. This got me quite excited and I now wanted to make many similar videos all at once, and just pump them out and get them out there.

So within this energy, I started to make a second video. Only now, I knew within myself that I had other tasks that I had originally planned for, that needed to get done first, tasks that I was now putting aside in order ride the energy wave of excitement and pump out another awesome video. This means that, in not looking at and directing myself within my practical, current, physical reality, and instead functioning from my mind-reality, I had now decided to prioritize this new idea over and above my other tasks and responsibilities that I had previously committed to myself to do. Yes, I could do it all, but only if I could do it quickly…

This is where I started to see the consequence of ‘a starting point of energy’ playing a role. Now with the knowing that I am putting off things I should be doing, that I had planned to do, that needed to get done in order to properly set up the current, present projects that were moving in my life in the HERE and NOW, I had created a time-crunch, pressure, rush, and lack.

So, when it came to spending time on certain time-consuming elements in the second video, I  ended up making choices that were less-then my best just to get through the point and get to the end result faster. There were certain new learning curves I faced, and instead of taking the time to walk through and process the new skill, I found ways around it and used techniques that were ‘good enough’, even leaving some things as they were simply to avoid the time required to fix them.

So in walking a creation process from a starting point of energy, I saw that I was willing to accept and allow myself to create something that is less-than my best, which is in turn accepting and allowing limitation and preventing me from self-expansion through avoiding learning and not investing the adequate time into birthing my idea properly, fully, to my utmost potential wherein I discover what my utmost potential actually is in this moment, and then see if I can expand it some more.

The second consequence of putting an idea into action from a starting point of energy, is in how I experienced making the first video compared to the second one. The first video felt like things were just falling into place, going so smoothly and well, because the time-factor was not even an issue and so the learning process was fun and felt easy and the end results that one that I was pleased with. The excitement I experienced was real because I knew I had done my best, invested myself fully and responsibly, and the end result was one I could stand by
The second video, however, felt like things were getting stuck, not working out, more difficult. I didn’t have TIME to learn the necessary skills to achieve my vision or follow through on suggestions that I knew were good. So, the end result was something that I knew was less-than my best, I knew within myself that I had taken shortcuts and participated in avoidance, ignoring the advice of others and instead chasing the experience of excitement and satisfaction, instead of living and creating that REAL excitement and satisfaction that comes from having really applied myself fully and actually done the best I could without expectation or conditions placed upon myself.

In this, the PROCESS of making the second video was unsustainable, even if the end result was pretty good or acceptable. If I were to work in this way on all projects, not only would I not effectively learn and expand, but I would also never really feel satisfied, and in constantly chasing experiences of satisfaction and excitement and never actually creating them for real, I would inevitably end up burning out and giving up, letting it all go and not wanting to do it at all.

Lastly, when I finally did get to the other things I had to do, I now experienced myself as unfocused, bored, and a tediousness coming in, because I was lacking the energy I had been participating in from before, and now it was like a withdrawal.

So, all in all, in having participated in an idea from a starting point of energy in the mind, and not a grounded, practical, fact-based physical reality starting point, my overall experience of myself was now polarized into positive/negative, my output was limited and less-than my best, not only in the one video project, but in other areas as well, and I missed out on opportunities to learn. All is not lost, however, as I can now let go of the energy, schedule my time properly, and continue with making my videos in a more grounded and sustainable way.

www.desteni.org
www.eqafe.com
Posted by Kim Doubt at 1:59 AM No comments: