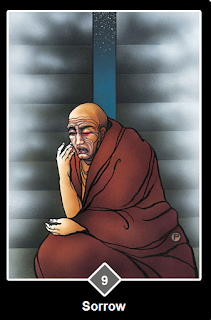 I pulled this card yesterday when I woke up feeling absolutely miserable. It is amazing what our emotions can throw at us for seemingly no reason at all. at least that what it feels like, but the thing is, there is ALWAYS a reason - one that can, without fail be traced back to ourselves, our life and our living.

This emotion felt like a prickly ball that was sitting right in the center of my body. Thankfully I recognized it for what it was, simply a feeling, an energy, and not the truth of me. The sensation was physical, but if I can give it a voice and words, tt felt like a 'what's the point', 'I can't do it all', 'I am bound to repeat the same old patterns of falling into a slump and it taking days or even weeks to get out of it'- a future projection of doom based on my subconscious knowing of all the chain reactions that could take place to lead me into a slump, because I had been there so many times before.

If I had accepted and allowed this self-talk to become me, I would have sealed my fate in a self-fulfilling prophecy. I would have gotten up, dragged myself, avoided responsibilities and wasted a day within living it as a day of self-abandonment, self-abdication and self-defeat.

Instead, I sought self-support with drawing an Osho card. I did this knowing my technique is not to depend on the cards, or use them to tell me what to do, but rather as a tool of self-introspection. It is giving myself a challenge to look at my situation from a certain perspective I may not have otherwise seen or considered.

The card I pulled was SORROW. It spoke about Buddha's right hand man mourning the death of his idol. His sorrow was so profound that he questioned his existence, because he thought that without the Buddha, he would never attain enlightenment. After meditating on the point all night, he realized that his greatest weakness, if he acted properly, could be his greatest strength. And it was from within the depth of his sorrow that he was able to attain enlightenment.

Personally, I do not believe in enlightenment as it is commonly defined, but the card was so very specific in the support I was able to derive from it. I realized that if I could pick myself up from this place, and push myself to stand up from within it, not accepting and allowing my mind and emotions to have dominance over me, that this point of feeling at the lowest of lows could instead be a moment of great triumph.

I have stood up from within great challenge in the past. Those moments where there is no other way, it is a make-it-or-break-it type moment where the consequences are staring you dead in the face. These are difficult moments where the choice is simple. But the moment and experience in my day yesterday was something different. It was a not-so-obvious moment. It was something where the choice was there, but not screaming at me. It would have been so easy to let it slide and get away with going with the flow of my mind. Remember these indicators that I just named, because they represent an opportunity for self to create a moment of prevention - that moment where you can see the play-out, but still feel there is time and leeway,  you can get away with it - no one would know. You can even delude yourself into thinking that you can let it slide and you will pick yourself up later, when it gets worse, you will change later - *promise*. Yes, this is the slippery slope, and it is a momentous opportunity to practice living Here, changing in the moment, and not only preventing consequences, but building a new self in the process.

And so I moved my day. I would say, I moved it not as well as I could have had I woken up feeling motivated and ready to go, which remains an area I can work on wherein I am the same yesterday, today and tomorrow despite how I feel mentally. But the point is that I caught the pattern and altered my direction so as not to repeat the pattern, thus contributing towards breaking the pattern, freeing myself and taking that step towards self-change. I did morning yoga, and my body felt stiff, tense and uncomfortable, whereas I usually feel light and flexible. I cleaned a room in preparation for a guest, and I did it well and did not cut corners because I was feeling shitty. I attended a meeting that my mind was busy trying to get out of due to not at all feeling like going, and the meeting went great.

It's really amazing what the mind can throw at us, which, when we submit to it, can throw off an entire day, even weeks and months. I see the chain reactions of events that would emanate from simply waking up in this experience, I see how it would build on itself and how the effects could spread into my life, creating unnecessary consequences and needless cycles of going through the same reactions and patterns that lessen me and diminish my self-relationship.

So where did this patterns come from?

Through practicing self-observation and self-investigation over the past few months, I see that I had gone through a period of motivation some weeks ago, a 'high' that usually leads to a fall. But because I saw it, I managed to work with the 'high' in such a way that would support me to remain consistent and for my change to be sustainable.

- I saw the little details that I began to want to let slip as the motivation wore off, and I made sure to do them and NOT let the slip. Meaning, when a detail would come up, I would either do it right then, write it down, or do it when it started naggling at me.

- I set myself up with calendars, checklists and reminders, so that when the procrastination and excuse-making began to kick in, I had already set up visual accountability to remind myself of what I would remain committed to, despite how I felt.

- Instead of trying to do it all in that period where I felt motivated, I created a pace that I knew would be comfortable in the long-term, because I cannot keep up that hectic pace that I can manage when I am feeling 'up' and 'together' and motivated. So I did the opposite of what I would normally do in that time: I slowed down, enjoyed myself and my environment, and I got the things done I had set for that week, and nothing more. I trusted the accumulation effect, and not the 'all at once' 'get it all done in one moment' effect that has created problems in my life time and time again as 'highs' and 'lows', 'accelerations' and 'slumps'.

All of these steps can be improved upon, as they are all steps as a reaction or management of a destructive point I am and have been living out. If my starting point is coming from a 'problem', then living in a constant reaction and self-management is only keeping the 'problem' in place, as it is the 'raison d'etre' of why I am moving as I am. So, I am instead looking at this as a step-by-step process wherein I set up a baseline I can integrate as a first phase, with many more phases to come.

Do you see the difference there?

So, how did my experience change from before to after self-introspection? I went from waking up on the wrong side of the bed and into a feeling of dread and not wanting to move, to seeing it as an exciting opportunity to change. Yes it was a drag and difficult and could have been better, but it was a step, a phase for me to learn from for next time when it happens again, I will move faster and smarter - until eventually, the movement is so thoroughly integrated that I just snap out of it instantly, or it ceases to happen at all. Either way, I will move... It's like a gift that keeps on giving - the gift of realizing my potential.