Do Good and Bad People Have a Different Afterlife Waiting?: micro-blog from Desteni Universe 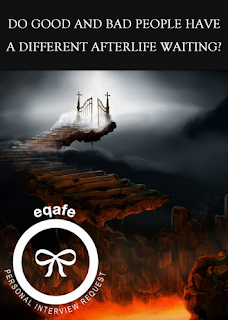 Ever since I have been learning about corruption in government and its horrific consequences on people, the abhorrent abuse of children and animals that goes on in the world, the atrocity of wars... I have to admit, I have felt the things described in this recording.

That righteous vengeance that says those responsible should pay for what they've done, should suffer as much as they made others suffer, FEEL the very same pain they inflicted so that they will learn, and never again repeat the same.

Now imagine that I somehow get the power to dish out such consequences upon them, the very same pain and suffering they caused to others... does it make it okay because I think and believe that MY reasons for doing so are right and just? Or does it rather make me one and equal to that which I condemned?

In this recording you'll hear about some of the multitude of factors that causes someone to become a 'bad person' - the worst kind of person that creates pain, suffering and destruction in the lives of others, and what they face at death. About how one must look existentially at the bigger picture of why we become who we become, and how our death processes are unique, individual and deeply personal, not to be compared to one another - much like our processes in life.

This recording, like many others, emphasizes the importance of focusing on self and one's own life process and living, which seems like the most difficult point, yet it is the only way to really be effective.

Do Good and Bad People Have a Different Afterlife Waiting?