Living in Abundance or Living in Lack?: micro-blog from Desteni Universe 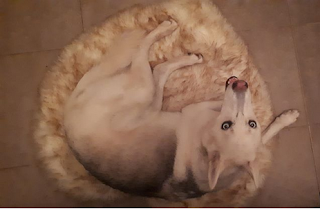 I finally found a rug that Ghost can shed all over and it won't make a difference!
Today's action shot is about lack, and how I have created it throughout my life through things like 'saving money', 'living frugally' and other such budget-oriented terminology.

I have wanted a fake bear skin rug for years now. I liked the idea of stepping out of bed in the mornings and on to the softest surface, and having that be the first physical experience of the day.
But I never got one because it wasn't necessary, was not an essential element required to survive, was a complete and total luxury with no real purpose except enjoyment.

Then the other day I was in a store looking for mats for Ghost, and I happened upon these heart-shaped fur rugs for 20$, and as I ran my fingers through it I fell in love!

I have lived, over the years, in an absolute state of lack. It started in my childhood where my parents went through some tough times, and there often wasn't any extra to get the luxuries, and sometimes not even the necessities.

Being a child, I didn't understand why there wasn't enough. Both my parents worked, and there was nothing I could do to change the situation, so I just accepted it as 'that's just the way things are'.
Into my adult years I lived with this lack - the idea that there's not enough and there's not going to be enough no matter if I'm working or not - it is an endless rat race just to keep up.
ok, so this may be somewhat true - but the EXPERIENCE of lack is not necessary, and sometimes, from time to time I've done things to kind of 'jolt' myself out of that mindset. This involves living within one's budget, but from time to time, doing or buying something for pure enjoyment only.

This supports to create the experience of 'having enough', of abundance, of knowing that one's needs have and will be met, of getting what you need, instead of making a habit of sacrificing, cutting corners, and preparing for lack.
It is not necessary to do this, but it does support so long as it's done in awareness, with aligning one's starting point, doing it deliberately and not going Into the energy of consumerism which is what becomes addictive over time.
So now I have this awesome rug, which receives me every morning, which Ghost loves to sleep on, which is completely impractical in Panama lol! But which I absolutely enjoy every time I see it or step on it.
My moral here is for those that have lived like I have lived: like Spartans, where every penny is treated like it's the last one and abject poverty is seemingly just around the corner - remember that it can be overwhelmingly a mindset before it is an actual reality, a reality that may never actually manifest!
My advice would be to manage your money, but from time to time do something exactly how you want to do it, just as a reminder of what it could be like to live in a world of support where all needs are met, that abundance that is here but not yet realized, and that expression of self-care that you WILL provide for yourself in this world, because that is what you would want for others and for the world as a whole.
Posted by Kim Doubt at 3:20 PM