Taking a Stand in Saying "NO": micro-blog from Desteni Universe 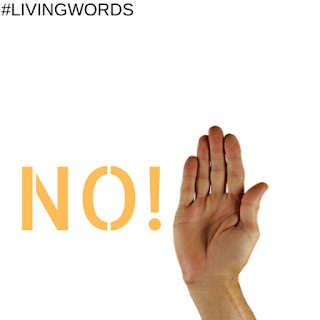 This week’s word I have been working with is ‘NO’. When it comes to saying ‘No’, I find my ‘people pleaser’ programming gets triggered. My process of coming to a ‘no’ in any given situation would be one where I would look first and foremost to what concessions I can make, where I can find or make the time and what compromises I can offer, where the end result would usually be a ‘Yes’, where it should have been a ‘No’/’No, not now’/’No, maybe later’.

In working with animals and with children, I have been placed in a position where I either re-define and live a proper ‘No’, or I get pushed around, feeling abused within unclear boundaries – because children and animals will take a mile when you’ve only offered an inch, testing your stand at every opportunity.

My re-defining and living of the word ‘No’ has been closely linked to my process of self-authority, and this week I would like to focus on the internal ‘No’ – that stand that I see I can take with myself and my mind, specifically when energies come up that tend to shake me, possess me and influence the entirety of Who and How I am.

In taking the stand and the certainty I am developing with my external environment, I now see I can apply it within myself too!

The important thing I have realized is that there is a difference between a ‘No’ that suppresses,
ignores and pushes the energy back down into myself (not good), and then there is the ‘No’ where I bring the energy up within me, really feel it, define it, embrace it as a part of myself, and then I take that stand and that stance and say ‘NO’ within myself – stating that I will not accept and allow this
energy to take me over in moments, that I chose instead to be Here and Breathe.

In a way, both telling myself ‘No’, and at the same time, hearing a ‘No’ from me – all within the understanding that this is NOT how I will accept and allow myself to be, that things are going to be changing now, that there is a part of me that is now being told to step down, and another part that will step up.

And even in voicing that word ‘No’ within myself, I am showing myself that the part of me that will step up, will in fact do so, is capable of doing so, is Here, ready and able to take that stand – because the process of developing that ‘No’ was in fact a process, it was strengthened and developed, walked through understanding, testing, trial and error and into a living. And now, being armed with that ‘No’, I can say the most difficult ‘No’ of all – the one I must say to myself, over and over until I change.
Posted by Kim Doubt at 12:24 PM